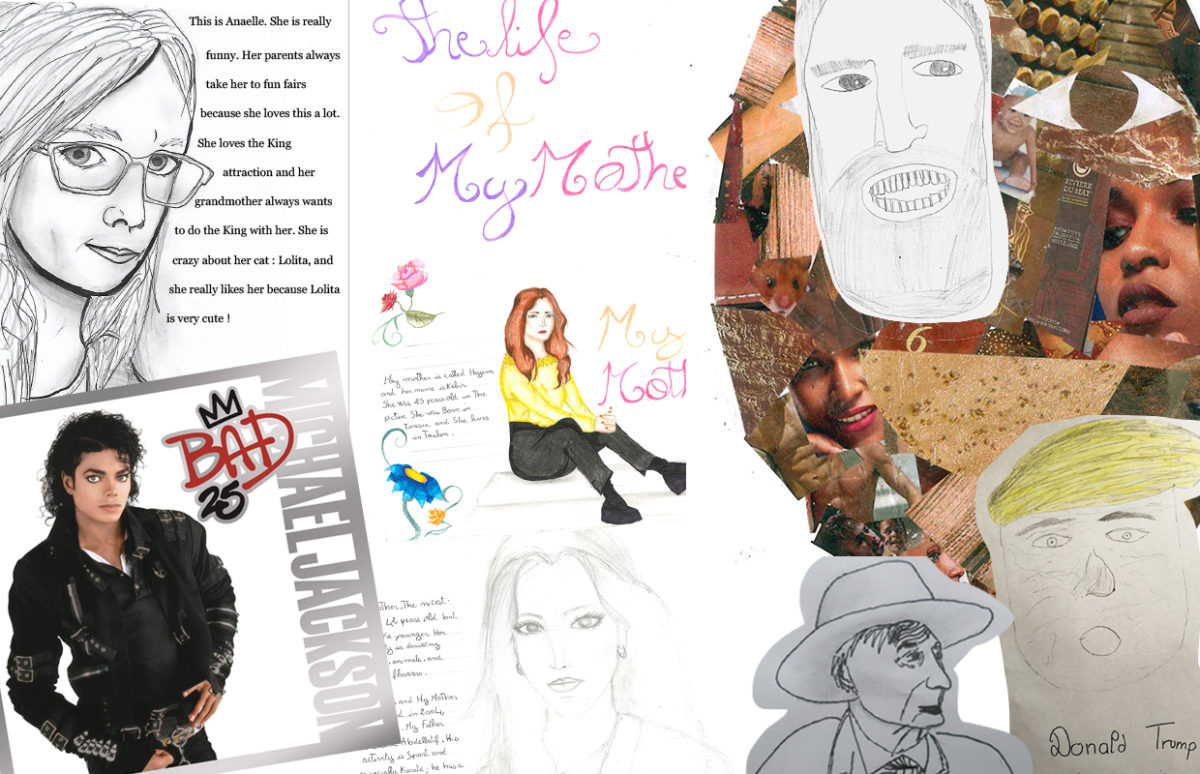 Back at the beginning of the school year, we launched three pupil competitions. The A1+ level competition was to write a 50-word text about a special image, like "The People's Portrait" we featured in September.

We were absolutely inundated with replies for the three competitions, which we are slowly working through. Please apologise to your pupils for the delay but we want to read every single one attentively. We'll be announcing the winners for the Who Am I? and Dorothea Lange contests very soon.

Please thank your pupils for all their wonderful texts and pictures. Many of them wrote about their brothers, sisters, best friends or parents or grandparents. We had lots of texts about footballers and Youtubers, actors and scientists. There were lots of singers: Michael Jackson and Ariana Grande were particularly popular.

It’s been very difficult to choose, but here are our 10 favourites, in alphabetical order. We hope you enjoy reading them as much as we did.

This is Anaëlle. She is really funny. Her parents always take her to fun fairs because she loves this a lot. She loves the King attraction and her grandmother always wants to do the King with her. She is crazy about her cat: Lolita, and she really likes her because Lolita is very cute!

Chloé R, from Mme Séry’s 6e class, Collège de Trois Mares, Le Tampon, La Réunion
The whole class did fabulous collage portraits. It was really hard to choose, but we especially liked this one from Chloé. His name is Michael Jordan.
He is 55 years old.
He is American.
He is a basketball player.
He lives in Brooklyn.
He dislikes super teams.

This is me and my dad, in the car. On Saturday, my dad is forty-one years old. He is always cool and fun. We were listening to Nicki Minaj. We look happy because we love this song and it’s a catchy song. This picture has a Snapchat filter: my dad is wearing two pairs of sunglasses. LOL!

Adele, or Adele Laurie Blue Adkins, is an English singer and songwriter. She was born on the 5th of May, 1988. She has fair hair and beautiful grey eyes. I love six of her songs: “Hello”, “Someone Like You”, “Rolling in the Deep”, “Set Fire to the Rain”, “When We Were Young” and “Skyfall”. She is always beautiful.

I have chosen this picture because Adele is one of my favourite singers and I love her songs. Donald Trump was born 14 June 1946 in New York.
He is American and he married on 22 January 2005.
He has 5 children.
He is the President of the USA.
Donald Trump has blond hair.

Donald Trump’s portrait by Jason Mecier:
In the portrait, there is a ticket, for the hair. There is a toothbrush, an aerosol, a cap… For the face, there is a newspaper, a very old phone, a circuit board… This person is a black American singer. His name is Michael Jackson. He was very well-known during the ‘80s but today he is dead. His nickname was “the King of Pop”. This image is of the cover of his album bad, which means “bad boy”. He is dressed in black and looks threatening and mean. It was his most famous album. It’s my favourite.

Quentin, from Miss Parigot’s 5A class, Collège Clagny, Versailles (78)
Sorry Quentin, we can’t reproduce the photo but we loved your text!

I was born on Monday, October 23rd, 2006. I was cute. I didn’t have glasses yet. When I was here, I wore glasses for the first time. At two and a half, my parents separated.

My arrival at middle school made me a little scared. I wanted the other students to leave me alone. Now it’s my second year in middles school. When I have time, I always draw characters from Dragon Ball. His name is Larbi. He’s my grandfather. He’s Moroccan and now he’s seventy-eight years old. When he was young, he survived scorpion bites and the 1960 Agadir earthquake. He lost all his family (mother, sister, brother), but he saved a lot of people.