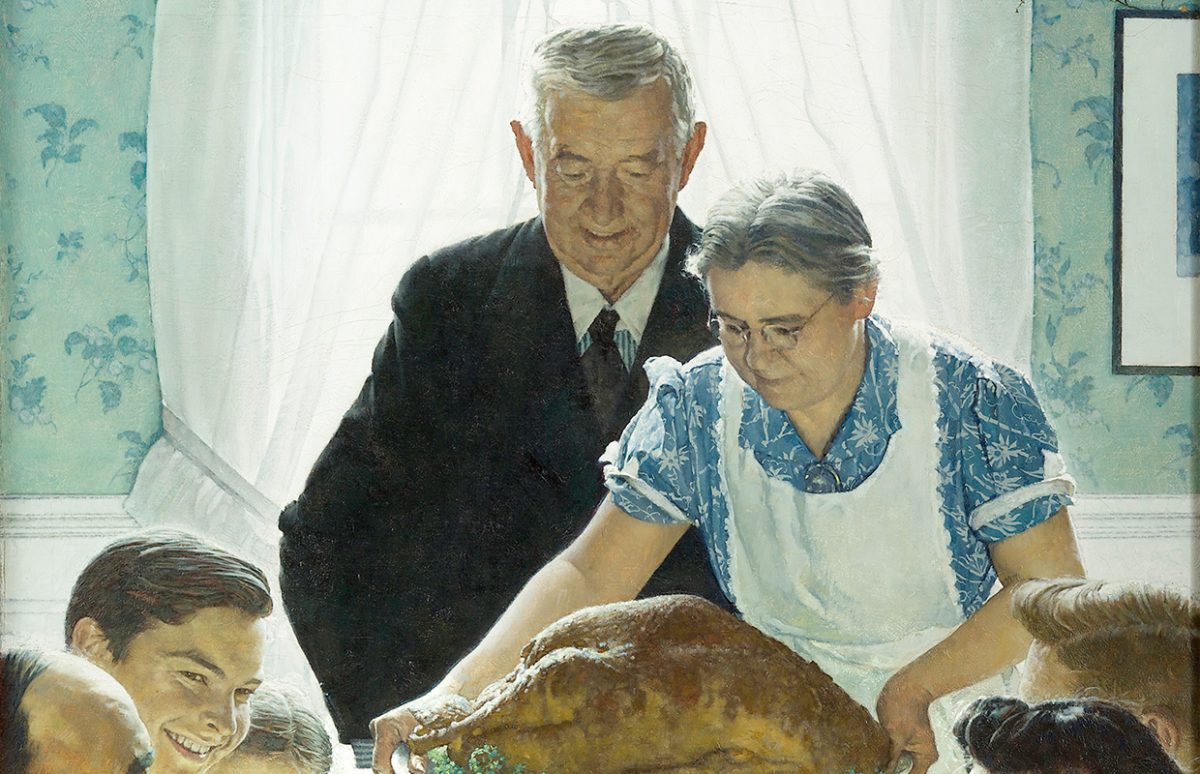 Seventy-five years ago, Norman Rockwell painted four iconic covers for The Saturday Evening Post depicting the Four Freedoms promoted by President Roosevelt: Freedom of Speech, Freedom of Worship, Freedom from Fear and Freedom from Want. The Freedoms would ultimately lead to the Universal Declaration of Human Rights. The iconic pictures, and other socially engaged paintings, will be coming to the Mémorial de Caen next summer.

Franklin D. Roosevelt was elected President four times, arriving in the White House in 1933 in the midst of the Great Depression and leading the country into and through the Second World War. He engineered the New Deal to pull the country out of Depression in the 30s but by 1940 he knew that he was going to have to persuade citizens who had come through the First World War and the economic crisis to make the sacrifice to enter the Second World War to defend democratic values against fascism.

He began preparing the terrain with his State of the Union speech in January 1941, in which he discussed the Four Freedoms he believed democratic nations must defend:

In the future days, which we seek to make secure, we look forward to a world founded upon four essential human freedoms.

The first is freedom of speech and expression—everywhere in the world.

The second is freedom of every person to worship God in his own way—everywhere in the world.

The third is freedom from want—which, translated into world terms, means economic understandings which will secure to every nation a healthy peacetime life for its inhabitants-everywhere in the world.

The fourth is freedom from fear—which, translated into world terms, means a world-wide reduction of armaments to such a point and in such a thorough fashion that no nation will be in a position to commit an act of physical aggression against any neighbor—anywhere in the world.

The Freedoms were also included in the Atlantic Charter, a document written by FDR and Britain’s wartime Prime Minister Winston Churchill in 1941, laying out a vision of the future after the war. It was signed by representatives of all the Allied and occupied nations.

Promoting the Four Freedoms
The Presidency set out to promote the Four Freedoms. Artists in all fields were commissioned to depict them. But they didn’t really inspire public enthusiasm. The U.S.A. joined the War in December 1941 because the Japanese attacked Pearl Harbor, not because there was a great wave of public belief in the need to defend freedom.

Norman Rockwell was an enormously popular illustrator. He, like many others, collaborated with the government in producing propaganda images. In 1942, he came up with an idea to illustrate the Four Freedoms. He proposed it to the War Office, but they had no budget. Instead, his regular employer, The Saturday Evening Post, commissioned four covers.

Rockwell’s intuition was to depict these abstract concepts anchored in everyday, small-town life. His inspiration for Freedom of Speech came after he saw a man stand up in a town hall meeting and make a point no one else agreed with. Yet they listened respectfully to his opinion. Freedom from Want shows a family about to eat a Thanksgiving meal.

The paintings were published in February and March 1943, and were immediately popular. The originals were sent on a 16-city tour to encourage people to buy war bonds, encouraging $132 million in war-bond sales, an enormous sum.

United Nations and Human Rights
Franklin Roosevelt died in April 1945, just before the end of the war. But the legacy of his Four Freedoms continued into the post-war period with the foundation of the United Nations and the Universal Declaration of Human Rights. His widow Eleanor Roosevelt devoted herself to having the freedoms enshrined in the founding document of international relations, in the belief that respecting them would help avoid another global conflict.

Exhibition
Seventy-five years after they were published, Rockwell’s Four Freedoms are still iconic images. To celebrate the anniversary, a touring exhibition examines Roosevelt’s beliefs, Rockwell’s paintings and contemporary artists’ interpretations. It is currently at the Henry Ford Museum in Detroit, and will travel to France, to the Mémorial de Caen, from June to October 2019. We’ll provide a teaching resource later in the year.

Meantime, you can find out more on the Rockwell Museum and the Henry Ford sites.

This topic would work well combined with work on Dorothea Lange and the New Deal.

In the News See the related news
> Billboards for Citizens