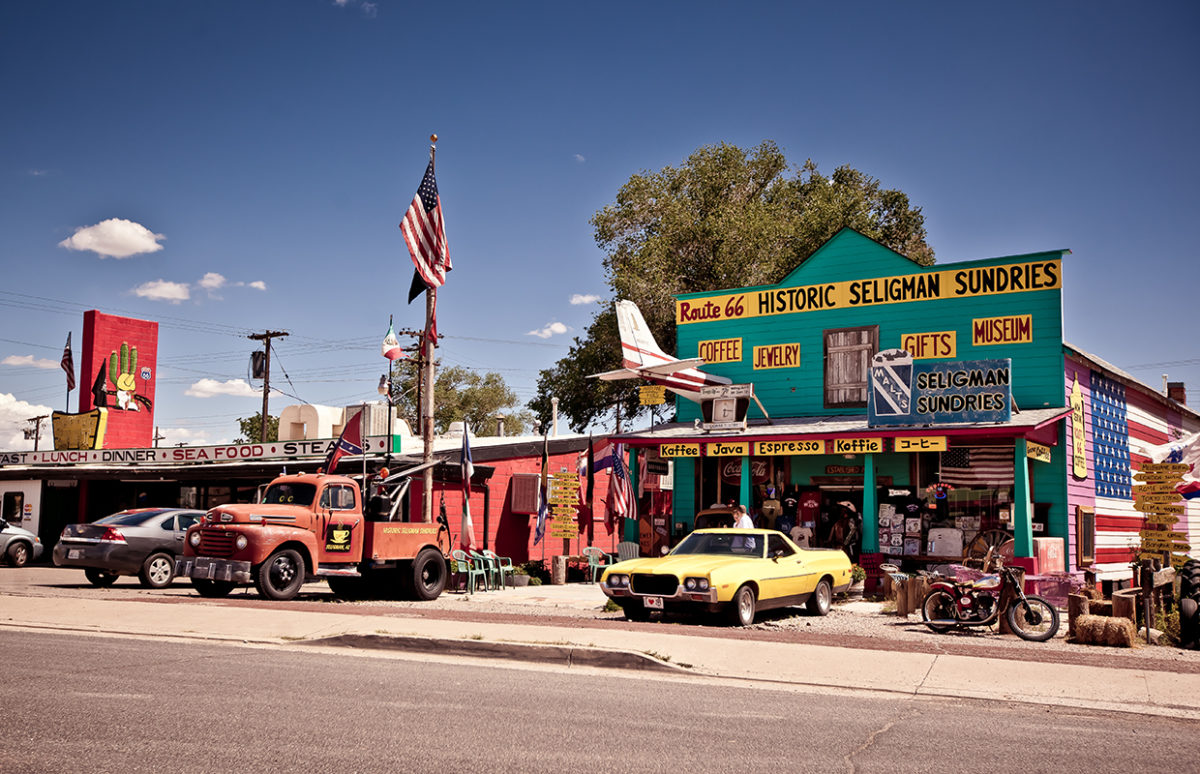 Route 66 has mythical status in the U.S.A. and around the world. It’s been immortalised in songs, novels and films. Although it’s no longer a major highway, it still draws visitors keen to experience the iconic home of the road trip. Every September, enthusiasts gather in Springfield, Illinois, for the Mother Road Festival, using the nickname coined by novelist John Steinbeck for Route 66.

For a weekend, Springfield echos to the sound of vintage cars from the road's heyday , not to mention Nat King Cole urging them to "get your kicks on Route 66".

Probably the most famous road in the world, Route 66 has been in terminal decline since the 1980s. But like all good myths, it lives in the hearts and minds of people across the U.S.A. and beyond.

Route 66 ran 2,448 miles from Chicago to Los Angeles. It’s always described in that direction, as if it was fundamentally linked to the country’s historical expansion west. In fact Cyrus Avery, an Oklahoma businessman who had been instrumental in getting the highway built, had travelled west in a wagon train as a boy.

Avery was one of the people pushing for a decent road network to match the increase in cars on the roads. There were half a million registered motor vehicles in the U.S.A. in 1910. That rose to 10 million ten years later.

The first sections of Route 66 opened in 1926. During the Great Depression in the 1930s, it saw the hundreds of thousands of migrants fleeing the Dust Bowl in the Mid-West who were immortalised in Steinbeck’s The Grapes of Wrath. Ironically, it was finally completely paved between 1933 and 1937 by the unemployed given work by Roosevelt’s New Deal solution to the Depression.

Trucking and Tourism
In the early days of the road it was adopted by the new road cargo industry that was taking over from trains in the movement of freight. The diagonal route of Highway 66 linked agricultural producers in the Midwest with the booming urban centers of California. It avoided the northern routes that were prone to bad winter weather.

From the outset, Route 66 was a leisure and tourism destination. In 1927, just a year after it opened, the U.S. Highway 66 Association was founded to boost tourism. Soon cabin camps, motels, diners and eccentric roadside art were put up to cater to tourists.

After World War II, as prosperity to returned to the country, Americans loved to spend their hard-earned cash and leisure time on road trips. For the Beat Generation, that desire for movement seemed to become an end in itself. It was immortalised in Jack Kerouac's On The Road, published in 1957 but based on diaries of his road trips from the late 40s.

The Beginning of the End
Route 66 was born out of one technological revolution and eclipsed by another. Trucks and automobiles had become so much part of American life that they were literally destroying the highways that hadn't been designed for this enormous increase in volume.

During the Cold War, President Eisenhower advocated developing a modern highway network modeled on the German Autobahns he had seen used to great effect to move troops during World War II. He believed it was critical to be able to move troops rapidly in the event of attack. So he persuaded Congress to pass the Federal Aid Highway Act in 1956, financing a new network of four-lane Interstates. It was the death knell for Route 66 and it’s like. In 1985, Highway 66 was finally decommissioned, meaning the state wouldn't ensure its continued upkeep. Nevertheless, the road remains imprinted on the American psyche and still attracts visitors from far and wide. Various schemes are trying to protect part or all of the road. Parts of it are listed on the National Register of Historic Places, or as National Scenic Byways.

When Congress passed the Route 66 Study Act 1990, mandating the National Park Service to consider plans to preserve the road, it recognized that Route 66 had, "Become a symbol of the American people’s heritage of travel and their legacy of seeking a better life." You can download this poster for your class. Have a good trip!

You can find documents on Kerouac's On the Road, Steinbeck's The Grapes of Wrath, Dorothea Lange's Dust Bowl migrant photos and Route 66 in  Shine Bright 1re Advanced File 4: "On the Road".

What's On See the related news
> The Beat Generation: On the Road
> On the Road with the Green Book
> Wide Open Spaces: American Wilderness

Downloadable resources ready to use in class
> Dorothea Lange: On the Road
> Illustrated Route 66 Poster