Skip to content
In the News > The Attack on Pearl Harbor 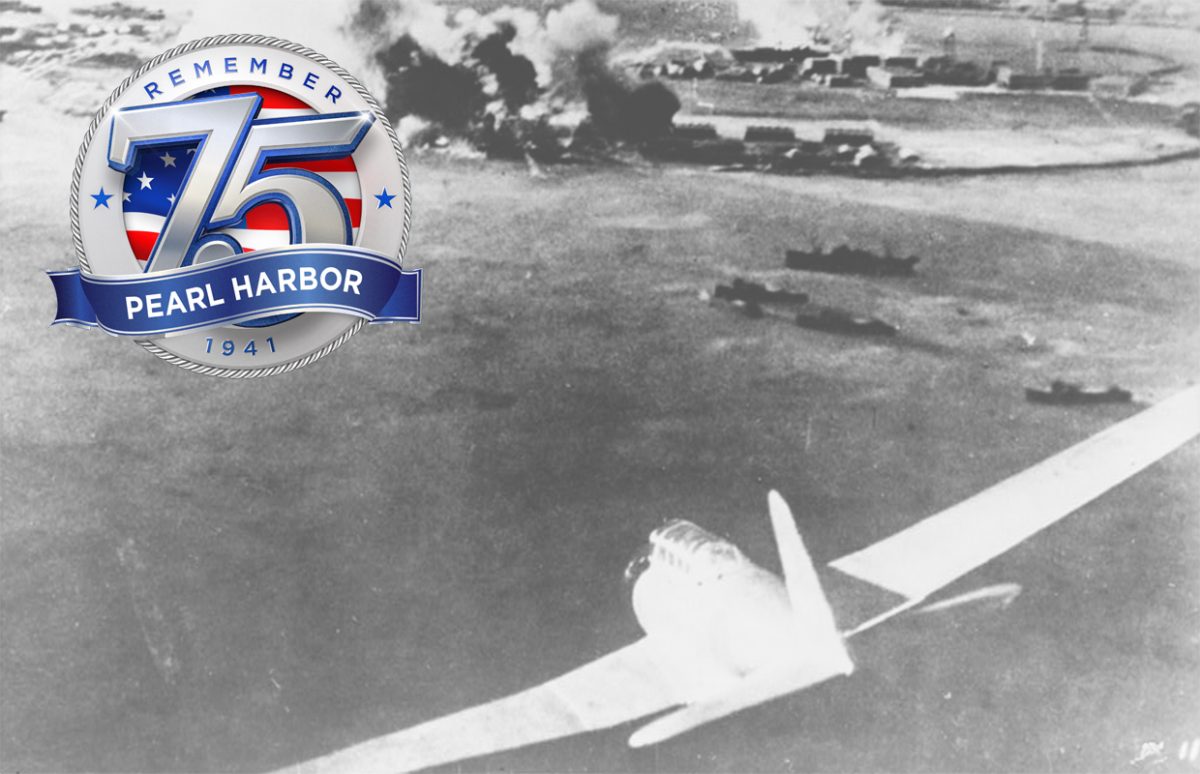 Seventy-five years ago, just before 8 a.m. on December 7, 1941, hundreds of Japanese fighter planes launched a surprise attack on the American naval base of Pearl Harbor near Honolulu, Hawaii. It was the signal for America to join World War II.

The raid came with no warning and no declaration of war. That Sunday morning, the attack took the country by surprise. In just two hours, the Japanese destroyed nearly 20 American naval vessels. It completely destroyed the American battleship U.S.S. Arizona and capsized the U.S.S. Oklahoma.

The attacking planes came in two waves, they sank or beached a total of twelve ships and damaged nine others. 160 aircraft were destroyed and 150 others damaged.

The bombing killed more than 2,300 American soldiers and sailors and another 1,000 were wounded.

President Franklin Roosevelt called December 7, 1941, "a date which will live in infamy."

Why did the Japanese bomb Pearl Harbor?
The causes of the attack on Pearl Harbor came from Japanese-American rivalry in the Pacific. Japan’s imperial ambitions had been evident from 1931 when it invaded Manchuria, on China's eastern seaboard. Japan needed more natural resources to increase its industrial productivity and strength. The Empire of the Sun became seen as a serious threat to the economic interests and influence of the U.S. and European powers in Asia.

In 1937, to solve some demographical and economical problems, Japan declared war on China. America was against this aggression and responded with trade embargoes and economic sanctions. Japan turned to the Axis powers, signing the Tripartite Pact with Germany and Italy in September 1940.

The specific oil embargo organised with the British and the Dutch was bad for Japan. Without its oil, Japan's military could not function and all war efforts would come to an end.

As war was inevitable, Japan's only chance was the element of surprise and to destroy America's navy as quickly as possible. So Japan decided to attack first.

The U.S. Enters the War
The U.S. was already close to joining the war, but in an attempt to preserve its neutrality and isolation position, it had only sent war supplies to the Allied forces, mainly Great Britain, France, and Russia. When Japan occupied French Indochina in July 1941, Roosevelt continued to avoid direct confrontation.

In one stroke, the Japanese action silenced the debate that had divided Americans ever since the German defeat of France left Britain alone in the fight against the Nazi terror.

Most people knew what the attack meant for the U.S. even before Roosevelt's official announcement the next day. December 8, President Franklin Roosevelt asked Congress to declare war on Japan. Congress approved his declaration with just one dissenting vote. Three days later, Japanese allies Germany and Italy United States.

War Relocation Program
After Japan bombed Pearl Harbor on December 7, 1941, American people displaced their anger onto Japanese Americans, even though they had nothing to do with the attack.

The fear of a Japanese invasion loomed. The general opinion was that the Japanese Americans were not loyal to the country, and might help the enemy with subversive acts.

This situation Franklin D. Roosevelt to sign Executive Order 9066 on February 19, 1942.This Executive Order made all Japanese Americans move to isolated camps in order to ensure their loyalty. This came to be known as Japanese-American Internment. More than 110,000 japanese Americans were removed from their homes in California, southern Arizona, and western Washington and Oregon and sent to ten relocation camps.

During this period, roughly 2,000 people of German and Italian ancestry were also interned.

In the summer of 1942, a Japanese-American fighting unit was suggested by the Office of War Information as a propaganda tool to counter Japanese claims of American racism. On Feb. 1, 1943, President Roosevelt announced the creation of an all-Japanese-American fighting unit (with white officers): the 442nd Regimental Combat Team. More than 17,000 Japanese Americans fought.

The all-Nisei 442nd Regiment, became the single most decorated unit in U.S. history. The regiment won 4,667 medals, awards, and citations. Many of these soldiers, when writing home, were writing to relocation centres!

A Congressional Apology
In 1988, President Reagan signed the Civil Liberties Act to compensate more than 100,000 people of Japanese descent who were incarcerated in internment camps.

Congress apologized for the "grave injustice" done to persons of Japanese ancestry. It declared that the internments were "motivated largely by racial prejudice, wartime hysteria, and a failure of political leadership," and authorized a $20,000 payment to Japanese-Americans who suffered injustices during World War II.