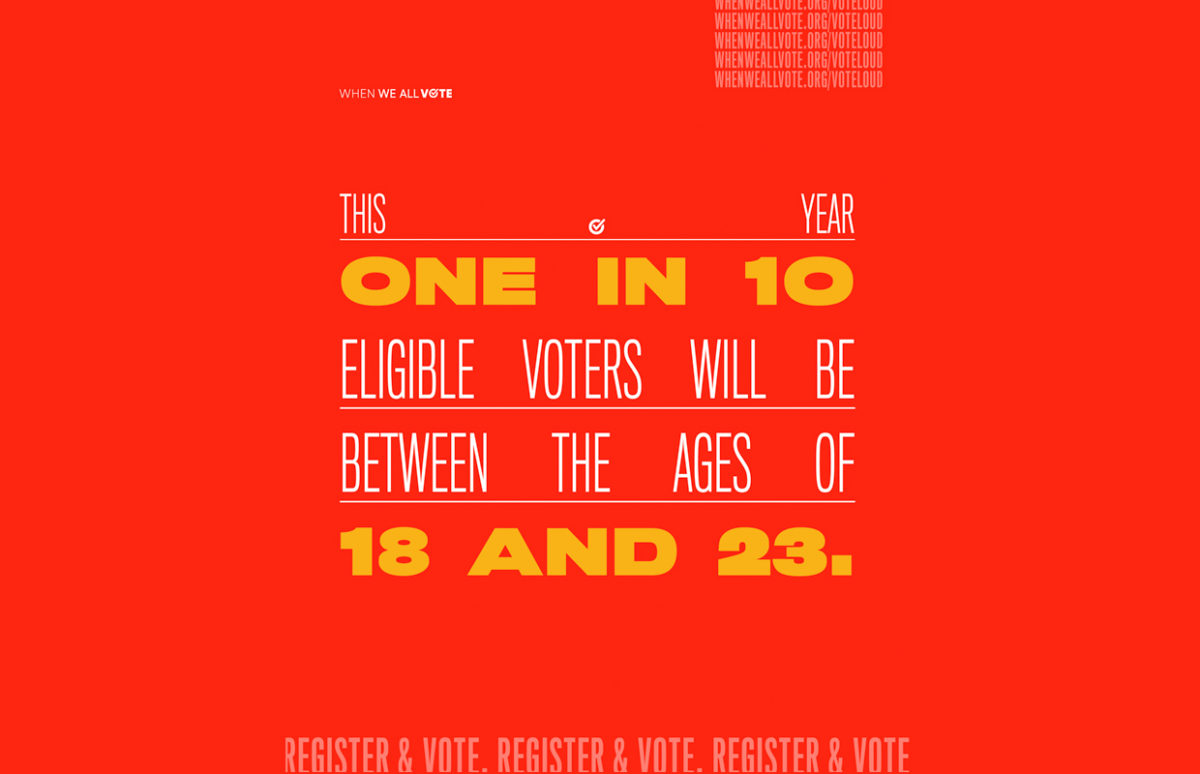 One of the  big battles in the U.S. elections is getting people to vote. Which starts with getting them registered. These videos are a great teaching resource.

In 2016, according to the U.S. Census Bureau, only about 70 per cent of citizens were registered to vote. Of those, however, about 86 per cent actually voted in the elections.

Historically, young people are less likely to register than older citizens, which is why at each election, organisations like Rock the Vote campaign to get them signed up.

When We All Vote is a nonpartisan organisation encouraging young voters and marginalised citizens to engage with the electoral system. It was launched by former First Lady Michelle Obama in 2018, and includes a board full of activist celebrities like NBA star Chris Paul and US Soccer star Megan Rapinoe, musicians and actors such as Janelle Monáe, Tom Hanks, Lin-Manuel Miranda and Selena Gomez. Its campaign specifically targeting young voters is called Vote Loud.

This short film would be a good way to introduce pupils to the topic from B1. On first watching it isn’t particularly important that they understand what’s being said (transcript below). The point is that they pick up that the voices don’t match the faces speaking on the screen. They can then concentrate on the words and work out that they don’t match either. The words and voices are of older/elderly voters, who vote in much higher proportions than young people. The film picks up on one created by the organisation Acronym for 2018 midterm elections: Dear young people, don’t vote.

Registration Rap
Hamilton creator Lin Manuel Miranda also enlisted the cast of the hit musical to help encourage young people to sign up on National Voter Registration Day. If millions of people are interested in a rap musical about a Founding Father and finance minister who died in 1804, they figure they can interest them in voting today. They reworked the “Alexander Hamilton” song to make it about an “ordinary citizen” and deliver messages about voter apathy, early voting, mail-in voting and debunk myths about fraud. The song is fairly long at 4 minutes, but the words run across the bottom of the screen, so it’s not listening comprehension, and pupils will get a kick out of spotting Michelle Obama right at the end. Pupils can get the gist from A2+, although an in-depth analysis would be closer to B2. Again, the transcript is at the bottom of this page.

When We All Vote - National Voter Registration Day

What are you waiting for? What do you stall for? REGISTER TO VOTE NOW: WhenWeAllVote.org/Hamilton #NationalVoterRegistrationDay

Vote So Loud They Have to Listen
The Vote Loud site also has some very thought-provoking posters like those below, pointing out the consequences of 100 million people not voting in 2016, but also celebrating the success of voter registration this year and showing the size of the youth electorate and its potential power. Every election there's all this whining.
Kids always hollering about the environment.
About jobs.
Healthcare.
No one's ever given me free money.
And what are the girls going on about still anyway.
Pay gap pay gap pay gap, come on honey!
Maybe if you work harder.
War on straws, what's next?
Life can't always be brunch or drip or TikToks. People don't know what real problems are.
Like you know thugs and looters.
And preserving our heritage.
I’m just saying what everyone's thinking.
And oh I’m voting.
Oh yeah I’ll be voting.
I'll be voting.
You know I’m voting.
Onscreen text: If you don’t use your voice, they will. Vote Loud. whenweallvote.org/voteloud Register now!

Hamilton Cast:
Deon’te Goodman: How does the system work with democratic leaders chosen every four years by well-trusted procedures so everyone can help fulfil the Founding Fathers’ vision if people don’t take part in the decision?

Daniel Yearwood: Who could envision four years ago those whose sat out numbered a hundred million. A third of us weren’t willing to choose a direction and eighty thousand voters across three states was all it took to swing the whole election.

Mandy Gonzalez: Then the midterms came, and isn’t it a shame, a quarter of young people let the election go right past ’em. They might’ve made a difference, but the registration deadline came and went, and some didn’t register ’cos no one asked ’em.

Deon’te Goodman: Our work isn’t done, democracy is our business, can’t just sit at home and leave it to the special interests. Let’s be educated, decide what the future is since here comes the person with the power to make the biggest difference.

Fergie Philippe: Yo, I’m Fergie Philippe and I vote every time. Never missed an election and I always rhyme. You registered to vote? It’s easy friend, only takes a few minutes from the start to the end.

Miguel Cervantes: Yes, yes, I love voting and I’m feeling fine. In most states, you can register to vote online. Other states can make it difficult, it’s true: you gotta print it out and mail it back. Yo, that’s on you.

Tamar Greene: Braah, braah. I’m inquisitive, fixative and the quickest is vote early in person. Take the initiative: so listen, that’s enough of our promoting. Can you commit to all your friends that you’ll be voting?

Justice Moore: Good luck, but there’s too much going on. I’m safer at home until this pandemic is gone.

Tamar Greene: So stay at home. No need to feel disobedient, ’cuz there’s a way of voting that’s just as expedient.

Kyle Scatcliffe: ‘’Cuz I reckon for a better election that we’d better make the voting accessible. Mail-in voting is a snap. Paper can’t be hacked. Get a stamp and make it addressable. And the mail’s collectible, professional. Do not be skeptical. You want the path of least resistance, then vote by mail from a distance. Because it’s safer and it simplifies logistics. I mean you gotta see on it’s legible, but then it’s acceptable. The ballot’s incontestable.

Justice Moore: Wow. How do you rap so fast?

Kyle Scatcliffe: Can we get back to politics?

Gabrielle Sorrentino: Yo. The mail is rigged and faked.

Karla Garcia: It’s not, but your concerns are valid.

Roddy Kennedy: I heard there’s voter fraud and those who want to change my ballot.

Eddy Lee: That’s actually really rare, but if you’re nervous, then I get it.

Krystal Joy Brown: Don’t like the mail? Then vote in person early then don’t sweat it!

Justice Moore: If there’s still more to count, will those votes be too late for it?

Krystal Joy Brown: No, they’ll keep counting, in which case we’ll have to wait for it.

Chorus: Dear friends of Hamilton, it’s 2020 and our need for you is only growing.

Chorus: Dear friends of Hamilton, whenweallvote.org/Hamilton can get you going.

Justice Moore: I’m getting it done.

Lin Manuel Miranda: Yo. Our nation is asking to hear your voice. ’Cause November is coming and so is your choice. Now I’ve said this before and it matters a lot: do not throw away your shot. I know it takes time, it’s a sacrifice. It’s fun to vote once. Do not vote twice. If you’re hearing my voice, you know what to do.

Justice Moore: My future depends on this. Yours does to.

Lin Manuel Miranda: Thanks to the HamFam for putting this together. For more information about voting, visit: whenweallvote.org/Hamilton. Do it today. Hisotry has its eyes on you.

Michelle Obama: I know that you all understand that. Let’s make sure that everyone one in our community does, too. Thanks again everybody. Now let’s get this done.

When we all vote