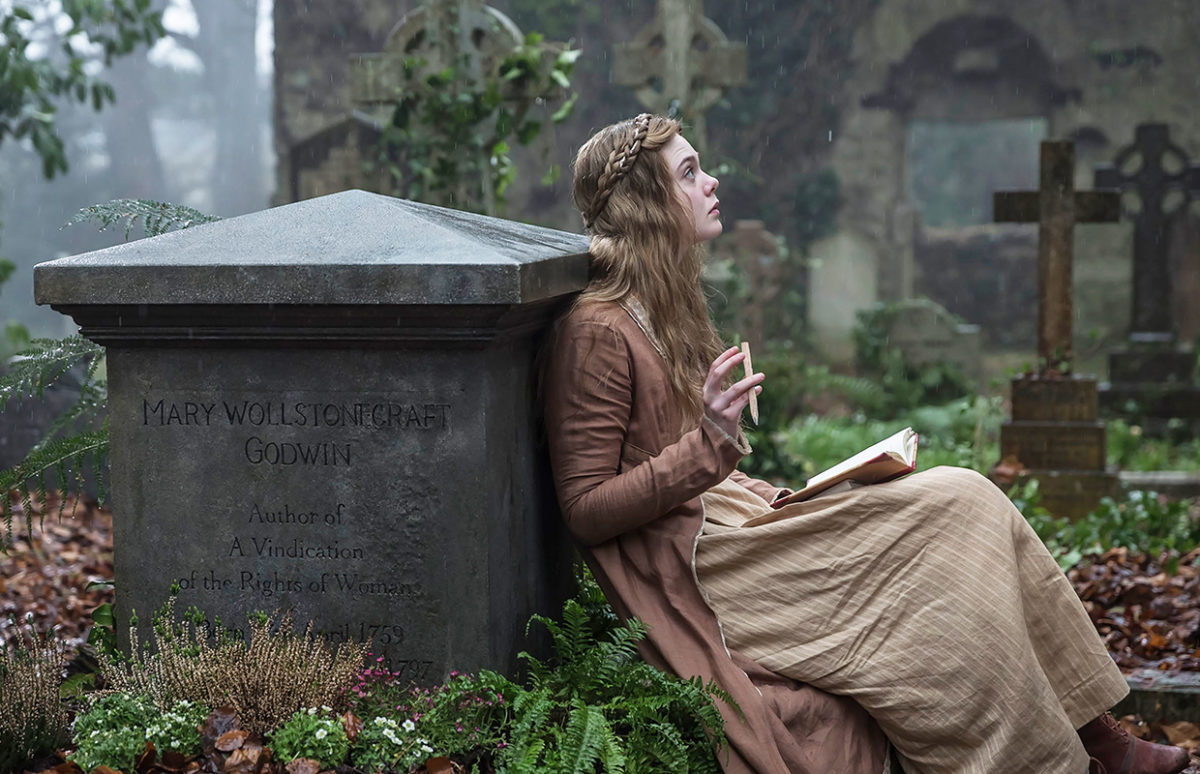 In the year in which the bicentenary of the publication of Frankenstein is being celebrated, a new biopic of its author, Mary Shelley, turns the spotlight on the young author who has long been eclipsed by a creation which escaped the pages of her book to enter popular culture.

Rather like the eponymous Dr Frankenstein himself, who is commonly confused with the monster he created, Mary Shelley has disappeared behind her novel. Of course, as the film Mary Shelley shows, as a female writer in early 19th century England, it was extremely difficult to be recognised.

Mary Wollstonecraft Godwin came from a very unconventional family and lived an unconventional life. She was the daughter of Mary Wollstonecraft and William Godwin. Wollstonecraft was an ardent feminist, author of A Vindication of the Rights of Woman. Godwin was a respected philosopher. They resisted the stifling sexual conventions of the time, refusing to recognise the traditional institution of marriage. However, they decided to accept marriage when Mary was pregnant, not wanting their daughter to suffer the stigma of illegitimacy.

Mary Shelley the film focuses on the period from Mary's mid-teens to the publication of Frankenstein. Mary never knew her mother. Wollstonecraft died days after Mary's birth and by the time the film opens, she is a teenager living in a "blended family": her father has remarried. There is no love lost between Mary and her stepmother, but she is close to her stepsister, Claire.

The family lives next to William Godwin's bookshop in London. Money is tight, but there is no lack of intellectual stimulation. Godwin organises literary circles, and in one of these Mary meets upcoming Romantic poet Perry Bysshe Shelley. She is just 16. He is five years older and married with a child. That doesn't prevent them eloping together, taking Claire along for good measure.

The film doesn't shy away from the difficult realities resulting from Mary's choices, including Shelley's wife's distress and ultimate suicide. Mary and Percy's Bohemian lifestyle alternates between parties and midnight flits with creditors at their heels. We witness one of Mary's several miscarriages and its devastating effect on her.

Writing and Directing Mary Shelley
The director and co-scriptwriter of the film is Haifaa al-Mansour, the first female Saudi Arabian film director. Al-Mansour was surprised to be considered for the film, quipping, "Do they know I'm from Saudi Arabia?" But when she looked into Mary Shelley's life she became determined to tell her story:

"Coming from Saudi Arabia, I really sympathised with her story and I really wanted to tell how she struggled to get her book published. England 200 years ago was conservative in a way, and expected women to act in a certain way. The famous woman star writer was Jane Austen, who wrote a lot about love and jealousy and marriage, everything within the domestic sphere. But Mary Shelley chose to write something totally different. And that is why people call it masculine, because it is about going out in the world and writing something philosophical and questioning gods and paradigms, that's something… and dark… that's something that's not really expected from a young girl."

The film focuses on Shelley. Frankenstein, or rather the monster, only makes the most fleeting appearance, and even then only its hand. Al-Mansour explains, "I think we've seen a lot of the monster. We don't really want to go there any more. The film is about Mary Shelley and her life, because everything in the book comes straight from her life. So the challenge was to structure the film in that way. Depicting a writer write is always a challenge, because it is boring. It's not like painting. You see the colour and you see the painting evolves and evolves. It's not as visual. And again it was concentrating on the facts that lead her to write Frankenstein, help us get around that."

Al-Mansour explains the enduring legacy of the book, which is celebrating its 200th  anniversary, "I think the themes in the book, loneliness and what life means, are very modern. I think when the book came out it was on the verge of a scientific revolution but right now we're doing cloning, which is really the same moral dilemma that we find ourselves in. Can we create life? What is life? What does it mean? So there are many things about the world and our existence that still puzzle human beings, and I think that is why the book endured."