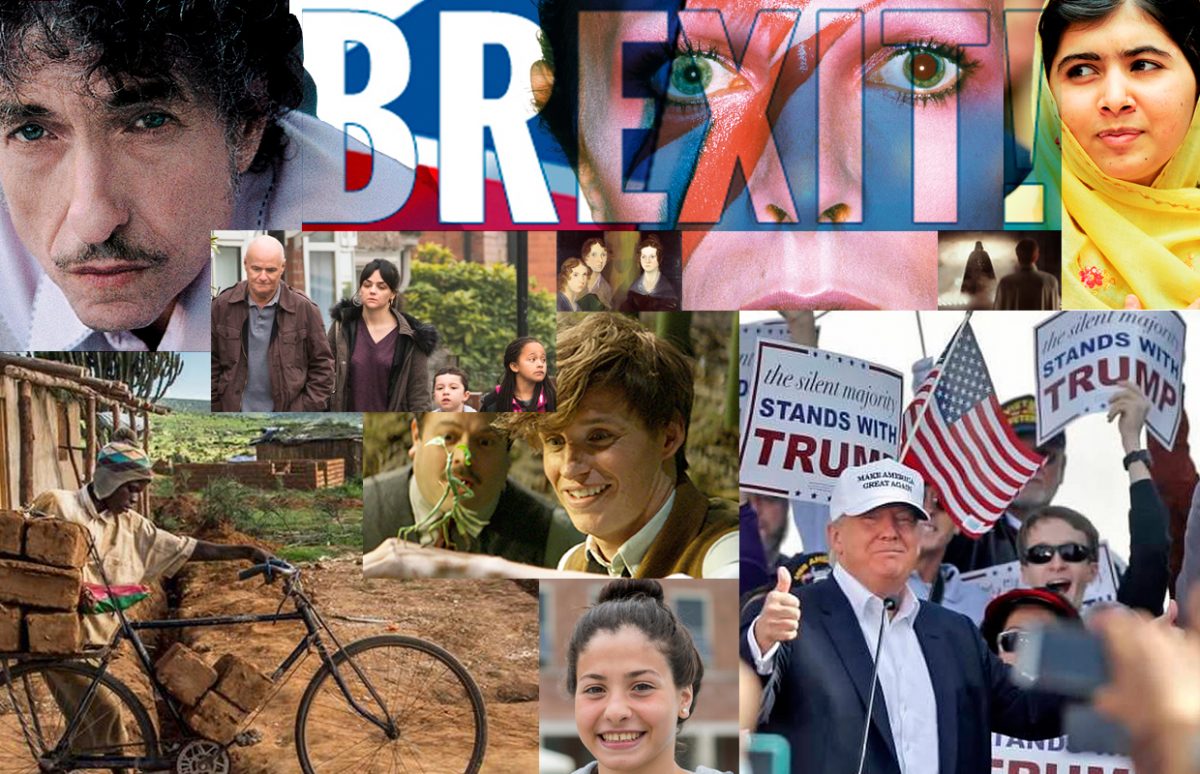 It was quite a year of surprises. And definitely not a good one for opinion-poll companies and forecasters. From Brexit to Trump, refugee athletes to the rock 'n' roll Nobel Literature laureate, we look back at 2016.

Election forecasters are probably having a long rest, or thinking about a new career about now. Last January, as the primary campaign opened for the U.S. Presidentials, all the predictions were that Hillary Clinton would easily win the Democratic nomination. The Republican race was more complicated but one thing seemed sure: Donald Trump was not a serious contender. In May, none of the forecasters predicted that the "Leave" vote would win the Brexit referendum. (To be fair to them, the leaders of the Leave campaign didn't think they would win either, and it quickly became clear that they had no plan for how to negotiate Britain's exit from the E.U.)

Fast forward to July and the party conventions in the U.S.A. Hillary Clinton did get the Democratic nomination, but it was a close-run race with Bernie Sanders, a 75-year-old independent Senator. Meantime, Donald Trump had seen off all the serious political candidates to become the first Republican nominee who had never held elected office or military command. But the forecasters still thought they knew what would happen. Trump would crash and burn, caught up by various financial and sexual scandals. Hillary Clinton would be the first woman to be President.

Except that it didn't work out that way. Donald Trump won the election. In another of those oddities that there were so many of this year, for the fifth time in American history, a candidate won the votes for the electoral college but lost the popular vote. In fact, he lost it by almost 3 million votes, the largest margin ever.

Seeking Refuge
The refugee crisis continued unabated, as the civil war in Syria and ongoing problems in Afghanistan, South Sudan and Somalia pushed millions of people to flee their homes.

A U.N. summit in New York in September declared that the world is currently facing the worst refugee crisis since World War II, with one in 113 inhabitants of our planet now a refugee or displaced person.

The common confusion between refugees and economic migrants fuelled debate in both the Brexit campaign and Donald Trump's political platform, which promised to build a wall to keep illegal Mexican immigrants out of the U.S.A. But another first provided a positive side to the refugee story: the first ever refugee team participated in the Rio Olympics in August. The ten athletes from South Sudan, the Democratic Republic of the Congo, Syria and Ethiopia didn't win any medals but received a rapturous welcome at the opening and closing ceremonies and gave a welcome human face to the plight of refugees. The year started with a new album from David Bowie, then, two days later, the news that "Major Tom" had died. The star's "Space Oddity" single was the soundtrack to the Moon landings, and as the year closed, another space pioneer died: John Glenn, the first American to orbit the Earth, and the oldest astronaut to go into space.

Another 1960s icon, Muhammad Ali, died in June. He was as famous for his charisma and his commitment to civil rights as for his prowess in the boxing ring. Harper Lee, whose classic first novel, To Kill a Mockingbird, did much to awaken consciences to the injustice of race relations in the U.S.A., was another of the year's losses. The reclusive Alabama novelist had finally published a second novel, Go Set a Watchman, more than fifty years after Mockingbird. Music lost more geniuses in April, when Prince suddenly died, and in November with the death of Leonard Cohen. But one of the year's biggest cultural surprises came from one of Cohen's contemporaries, when the Nobel committee awarded its prize for literature to Bob Dylan, for the first time honouring a musician and songwriter rather than a poet, novelist or playwright. The year also saw some widely commemorated anniversaries. The British remembered the Battle of the Somme in 1916, the most bloody in British military history. Americans meanwhile commemorated the 75th anniversary of the Pearl Harbor attack which led to the U.S.A. entering World War II. Literary greats were remembered: Charlotte Brontë, Roald Dahl, and of course Shakespeare.

And on a more cheerful note, the Queen Elizabeth II, Britain's longest reigning monarch, celebrated her 90th birthday. And viewers worldwide enjoyed the dramatisation of her reign in Netflix series The Crown.

In the News See the related news
> Brexit Update
> President Trump
> Space Pioneer Dies
> Muhammad Ali Floated Like a Butterfly
> The Times They Are A-Changin’
> An Olympic First: a Refugee Team