Skip to content
In the News > What’s Going On in the U.S. Congress? 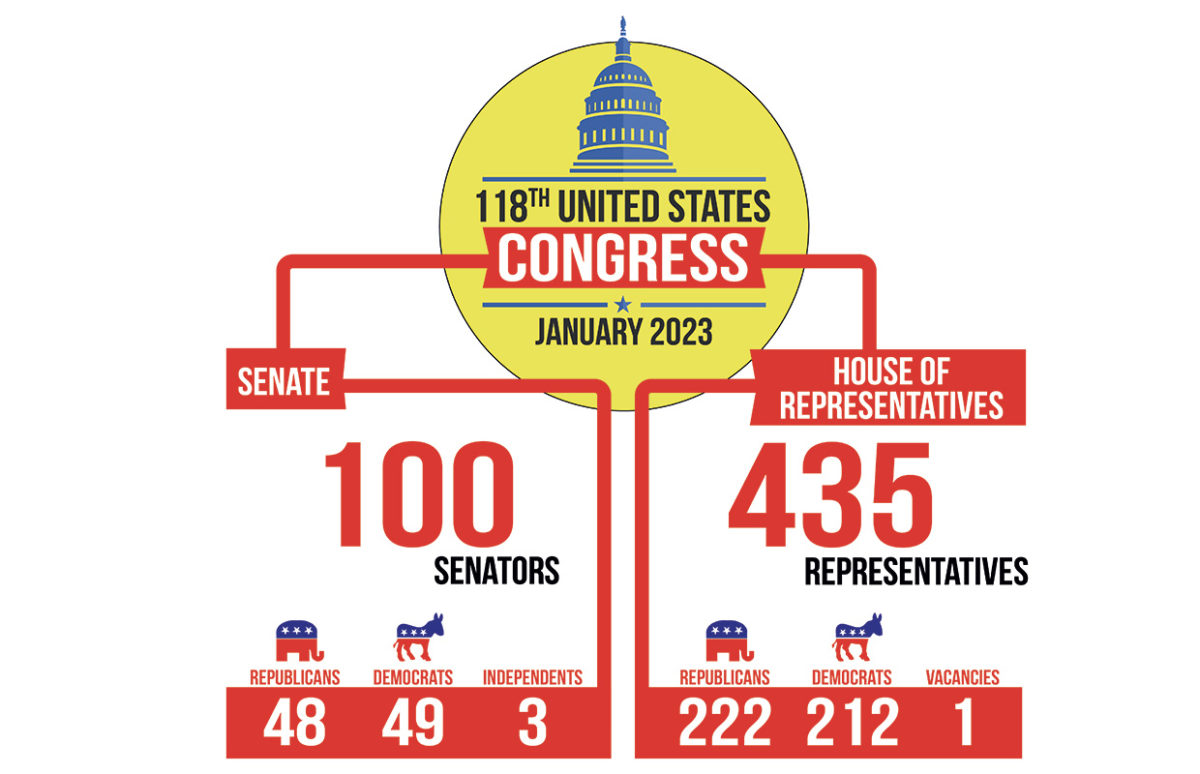 After the Midterm elections in November, the 118th Congress has been sitting since 3 January. The Midterms were expected to result in a defeat for the Democrats and a lame-duck presidency for the next two years. But the Democrats have kept hold of the Senate and although the Republicans have a small majority in the House, the recent Speaker election showed the party is deeply divided. As a new election cycle starts, leading to the 2024 Presidential election, what does it all mean?

Historically, the President’s party tends to lose Congressional seats at the Midterms. If the party loses a majority in one or both Houses, it can result in a “lame duck” presidency for the remaining two years of the term: the President struggles to get any of his planned legislation passed and at most can veto legislation proposed by the opposing party that does pass.

November’s election actually resulted in the Democrats increasing their tiny majority in the Senate: although the Republicans have 49 seats to the Republican’s 48, the three independents usually vote, or caucus, with the Democrats and Vice-President Kamala Harris has the casting vote.

Speaking of the House
The Republicans have a 10-seat majority in the House of Representatives (which is expected to become nine in February after a special election in Virginia to replace Democratic Rep. A. Donald McEachin, who has died). But that apparently doesn’t mean that the Republican Representatives all plan to vote for the same thing. The election for the Speaker of the House, who has a major influence on the legislation that is debated, saw a number of rebel Republicans repeatedly voting against Republican Kevin McCarthy for the post. It ultimately took 15 votes, close to a record, for him to obtain the post. About 20 members of the right-wing Freedom Caucus opposed his candidacy and demanded a lot of concessions to vote for him in the end.

McCarthy replaced the long-serving Democratic Speaker Nancy Pelosi, who chose not to stand for the position of Minority Leader. That was easily won by New York Rep. Hakeem Jeffries, the first person of color to hold the post.

The Speaker has a lot of influence on the creation and membership of House committees, which he plans to use to launch counter attacks on the Democratic-led January 6th committee for example. But in terms of legislation, anything passed by the House is unlikely to pass in the Senate.

Looking to 2024
Now that the midterms are over, traditionally the election cycle that will lead to the 2024 Presidential election can begin. Former President Donald Trump declared his candidacy in November, despite many of the candidates he had supported in the Congressional and Gubernatorial elections failing to win. Another serious Republican candidate is Florida Governor Ron DeSantis, who won re-election by a large majority and who has already raised millions of dollars for a presidential campaign.

The Democrats are waiting to see if Joe Biden will choose to stand for re-election. Before the Midterms the President’s age (80) and apparent lack of popularity made that seem unlikely. But the better-than-expected election results put him back in the running. Recent revelations that he, like Donald Trump, had top-secret documents at his former office and home that should have been sent to the National Archives may put that in doubt. But a lot can happen in a year-and-a-half. There are sure to be plenty of candidacies, and some withdrawals, between now and the beginning of the primary season in January 2024.

Don't miss our A2+ downloadable resource on anti-gun activitist Maxwell Alejandro Frost, who became the first member of Generation Z to be elected to Congress at just 25.

In the News See the related news
> U.S. Presidential Marathon
> What’s at Stake in the U.S. Midterm Elections?